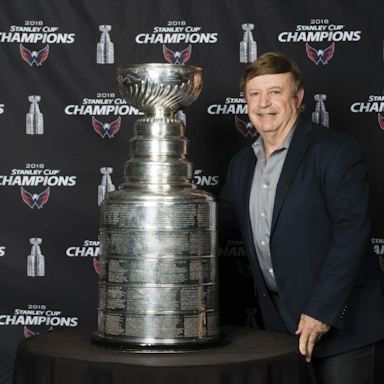 Lew Strudler is living a dream he envisioned as a young boy on the tennis court and baseball field: having a career in professional sports.

He has had a distinguished career in the sports world as a player, coach, and executive.

Growing up, Lew was always found on the tennis court. That led to a tennis scholarship at Long Island University, where he had an outstanding four-year career.

As a dad, he coached his daughter Erica for 15 years in softball, travel ball, and in the JCC Maccabi Games. Those teams won three gold medals and one silver, including winning the gold medal In the Pan American Maccabi Games in Argentina.

In 1982, Lew answered a call from Irene and Abe Pollin to join the Washington Capitals as vice president of marketing. He was asked to put together a Save the Caps campaign at a time when the Capitals were struggling financially. This campaign was successful and today, the Capitals are one of the premier franchises in the NHL.

Lew is currently vice president of global partnerships with Monumental Sports and Entertainment and is the longest-tenured business executive in the organization. Besides his business responsibilities, he is responsible for compiling the team schedules for the Capitals and the Wizards.

Getting to hoist the Stanley Cup in 2018 was Lew’s proudest moment.