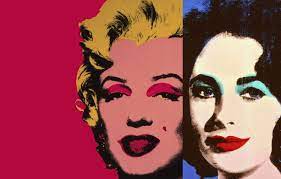 J Talks: Becoming Jewish- Warhol’s Liz and MarilynWednesday, February 1 | 2:00 PM | $10 | Via ZoomThe public personas of Elizabeth Taylor and Marilyn Monroe were constructed, but when they converted to Judaism, the change for both women was personal and profound. Becoming Jewish: Warhol’s Liz and Marilyn draws parallels between the actresses’ identities as Jewish women and Warhol’s exploration of their celebrity through his image-making.“Marilyn was a myth,” wrote the journalist Max Lerner in 1962. “And Liz is a legend.” Andy Warhol’s iconic portraits of Marilyn Monroe and Elizabeth Taylor reflect this sentiment. Elizabeth and Marilyn enthralled him: they were beauty, success, and fame personified.In the 1960s, the cultural power of these two screen goddesses was immeasurable. Fans, including Andy, fixated on their lives. He was, as always, drawn to the dark side of celebrity, interested not only in their screen triumphs, but also their troubled marriages, illness, and the rumors that filled the gossip magazines. As he once said, “Everybody needs a fantasy.”While their families and love affairs were widely reported on, Monroe and Taylor managed to preserve personal lives separate from their public personas. Thus, the conversion of both women to Judaism remained private. Marilyn chose to become Jewish upon her marriage in 1956 to the playwright Arthur Miller, himself a Jew. She took the decision seriously, studying Judaic texts with the Miller family’s rabbi, Robert. E. Goldburg. Liz developed a spiritual and emotional connection to Judaism after the 1958 death in a plane crash of her producer husband, Mike Todd (born Avrom Hirsch Goldbogen). She converted the following year, and was a passionate supporter of Israel and Jewish philanthropies throughout her life.Becoming Jewish: Warhol’s Liz and Marilyn explores Andy Warhol’s fascination with Marilyn Monroe and Elizabeth Taylor, and the tabloid world they embodied. His epochal paintings of the actresses in the 1960s coincided with the end of the Golden Age of Hollywood and an upsurge in consumer culture. Jewish consciousness and openly Jewish celebrity were also on the rise. The fact that Hollywood’s blonde bombshell and violet-eyed siren were both converted Jews was significant: it signaled a growing popular acceptance of Jewish public figures. Warhol’s portraits, both photographically familiar and disturbingly abstracted, explore the complex, manufactured nature of identity. His images cemented their status as the most glamorous women of their era, the twentieth century’s great myth and legend.Join us for this virtual lecture led by the Jewish Museum of New York.Questions? Please contact CoA at 301-348-3832What is CoA? A Bender JCC adult program, welcoming all, engaging the community, offering trips, lectures, films, concerts, and more…