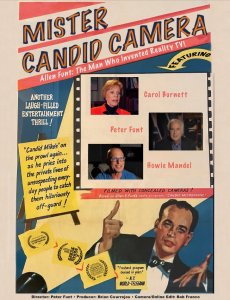 Cinema J: Mister Candid CameraThursday, September 15 | 7:00 PM | $12English | Documentary | USA, 2021 | 1h 29mScreening Location: Bender JCC – Kreeger AuditoriumGet back to the laughter! The story of the life and career of comical genius Allen Funt, and his legacy as the mastermind of the Candid Camera radio and TV shows.“Candid Camera,” which aired on and off from 1948 to 1990 with Mr. Funt as its host, secretly filmed people confronted with talking mailboxes or trick coffee cups. “Smile! You’re on ‘Candid Camera’!” was the victim’s tip-off. Startled bowlers would see balls returned minus finger holes. A car would roll down a hill and stop, and passersby who were asked to check on the trouble would find it lacked an engine. The show was a precursor of reality-genre television shows such as “Cops” and “World’s Most Dangerous Animals.”The film includes clips from the long-running TV show, never before seen home movie footage, vintage commentaries by Muhammad Ali and Paul Newman, dramatic archival footage from Allen Funt’s trip to the Soviet Union at the height of the Cold War, and new interviews with comedians Carol Burnett and Howie Mandel.**Proof of vaccination is required to attend all in-person films at the Bender JCC**Questions? Contact Coming of Age staff at 301-348-3832