Exile and Return: The Birth and Defining Moments of Ancient Judaism

Exile and Return: The Birth and Defining Moments of Ancient Judaism 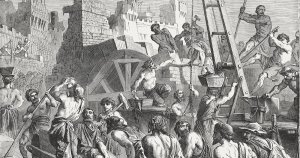 What was the impact of involuntary and voluntary forced migration on Judaism, a diaspora religion? Without the historical experience of the exile and return, Judaism would not exist.

In the midst of political collapse and the annexation of the Southern Kingdom of Judah during the sixth century BCE, how did a kingless and kingdom-less people maintain authority and coherence? With the return of exiled Judahites from Babylon and those who fled to Egypt, plus others from smaller satellite nations like Moab, complications arose in articulating a post-exilic, “normative” Judaism.

A compromise was reached through the formulation of the final form of the Hebrew Bible. The text became the doctrinal constitution of a new state: defining laws, stipulations, and narratives with poems and other writings on post-exilic citizenship. Two seminal, opposing views dominated the conversation and redaction process: the orthodox/conservative (Persian Jews) and liberals (Egyptian Jews).