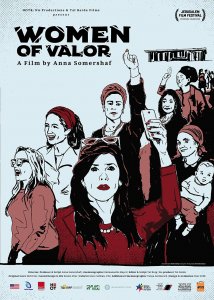 Cinema J: Women of ValorThursday, March 16 | 7:00 PM | $12Hebrew with English Subtitles | Documentary | Israel, 2021 | 1h 17mScreening Location: Bender JCC – Kreeger AuditoriumA social activist leads a revolution to allow ultra-Orthodox women to enter Israeli politics, in this extraordinary portrait of courage and gender equality.In the Haredi community, a woman’s obligation is to marry and bear children and serve as the primary breadwinner while her husband studies religious texts. Haredi political parties in Israel forbid women to seek public office. Fed up with the status quo, Esty Shushan is fighting to change that. She co-founds a nonprofit calling for the representation of Orthodox women in the Knesset, taking their case to the UN women’s rights committee and the Israeli Supreme Court. To prepare the next generation for leadership roles, her Nivcharot organization establishes a program to mentor young women and get the first female name on the ballot. But change comes with a cost, as Esty’s activism brings threats, suspicion, and online harassment. Ostracized as a “fake Haredi,” she must reconcile deep-rooted frustration over ultra-Orthodox life with her efforts to bring the silent voices of women to the center of Israeli discourse.Director Anna Somershaf takes to the streets alongside this modern-day suffragette movement, affecting the lives of some 600,000 Haredi women, a beacon of equal rights worldwide.Questions? Contact Coming of Age staff at 301-348-3832