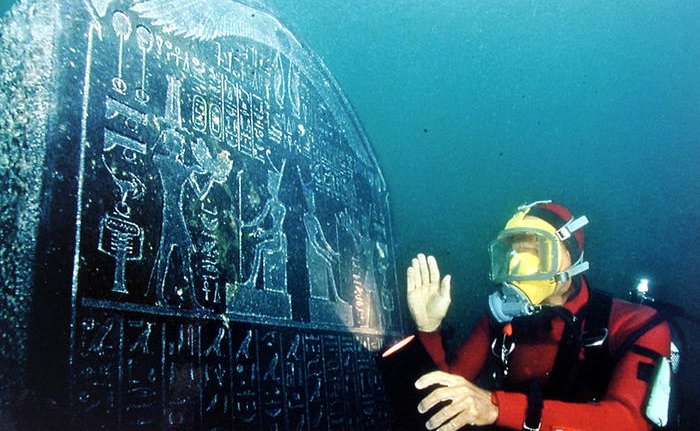 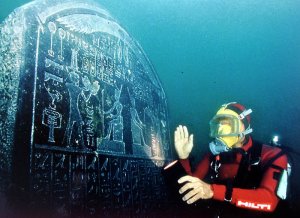 FILE–File photo dated May 2001 showing French underwater archaeologist watch an intact stele, engraved upright stone slab, covered with hieroglyphic inscriptions, dating from Nectanebo I. Stating that it must be set up in the township of Heracleion in Alexandria-Thonis. More than 2, 300 years ago, an earthquake sent the Pharaonic city of Heracleion to the bottom of the Mediterranean. However on Thursday June 7, 2001, French underwater archaeological team working off Egypt’s northern coast winched to the surface statues, columns and other precious items that had laid hidden in the murky depths since that time . (AP PHOTO/Christoph Greigk/HILTI FOUNDATION)

Peter Schertz, Curator of Ancient Art at the Virginia Museum of Fine Arts

The cities of Thonis-Heracleion and Canopus sank into Egypt’s Aboukir Bay some twelve hundred years ago. Once centers of international trade and home to major religious cults and celebrations, these cities were virtually forgotten until the underwater archaeologist Franck Goddio rediscovered them in 1996.

What Goddio found were not only the remains of major religious complexes closely tied to maintaining the legitimacy of the reigning pharaoh and dynastic continuity during the Late Period and Ptolemaic Period, but also a wealth of artifacts associated with the annual celebration of the Mysteries of Osiris that ensured the fertile of the land and Egypt’s well-being.

Peter Schertz will introduce the exhibition Treasures of Ancient Egypt: Sunken Cities currently at the Virginia Museum of Fine Art, focusing especially on the topic of continuity and change in the art and religion of Ptolemaic and Roman Egypt.