Join the JCC Men’s Club for a talk by Joel Poznansky, the first Jewish officer in the Queen’s Coldstream Guards in almost 400 years.  Joel will discuss his experiences in 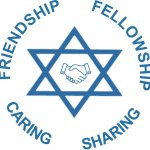 protecting Buckingham Palace and the Royal Family.  The Coldstream Guards is a part of the Guards Division, Foot Guards regiments of the British Army. It is the oldest regiment in the British Army in continuous active service, originating in Coldstream, Scotland, in 1650 when General George Monck founded the regiment.

For more information, contact Paul Weinberger at paulandadam1@gmail.com or 301-229-2582.