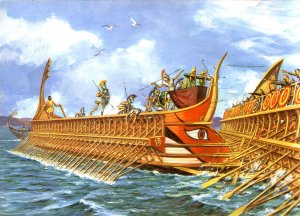 This presentation will begin with highlighting the only physical representation of an ancient sea battle, memorialized in an Egyptian temple relief. This battle featured an array of Sea Peoples contesting with the naval forces of Pharaoh Ramses III early in the twelfth century BCE.

The next phase of the lecture will focus on naval clashes for which there were eye-witness accounts, such as the Battle of Salamis, fought between an alliance of Greek city-states and the Persian Empire in 480 BCE. Later that century Thucydides’ wrote an account of the Peloponnesian War that featured ships such as triremes, sea battles, and naval policy. Little physical evidence survives of triremes, yet we know Thucydides commanded a squadron of this feared ship of war.

The final element of the presentation will feature accounts derived from secondary sources, such as the sea battles of the First Punic War. The Roman Republic lost countless ships and crews during the First Punic War, due to storms and engagements with the Carthaginians. In terms of ships and casualties, this was the costliest naval war ever fought. In particular, the disaster off the coast Camarina, Sicily in 255 BCE destroyed two hundred seventy Roman ships with over one hundred thousand dead.

Alfred S. Bradford holds the John Saxon Chair in Ancient History at the University of Oklahoma