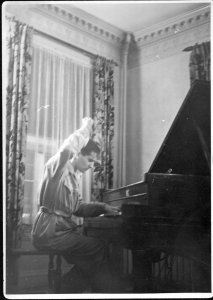 The concert is a tribute to the great American composer and conductor, Leonard Bernstein.BE A PART OF MUSIC HISTORYThe centerpiece of this event will be the performance of a recently discovered piece, “Music for String Quartet”, composed by Bernstein in 1936 while still a student at Harvard. Unknown for decades, it was recently found by Kentlands resident Lisa Pickett whose parents were friends and colleagues of Leonard Bernstein. The piece has only been performed publicly once at its world premiere last November at the Tanglewood Music Center, Lenox, Massachusetts, and has never been published or recorded. It is being offered by special permission given to Musica Viva by the Bernstein family.The concert program will also include Bernstein’s rarely performed “Trio for Violin, Cello and Piano” as well as a piano quartet by Mozart and piano quintet by Schumann. Both of these pieces were among Bernstein’s favorites and he recorded each of them with the Juilliard String quartet in the 1960s.We’ve assembled musical talent commensurate with the occasion – a string quartet and pianist drawn from the Global Music Partnership. All musicians are award-winning performers and recording artists who also hold key teaching positions at leading universities and orchestras.Upon the conclusion of the concert, you are invited to join fellow supporters at a reception to enjoy refreshments and meet the performers.The concert is a tribute to the great American composer and conductor, Leonard Bernstein.

See what the Washington Post says about the upcoming Tribute to Leonard Bernstein.