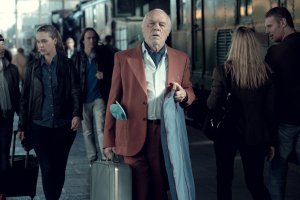 You will receive the link and password to screen the film two days in advance and then the talkback will take place on Wednesday at 5 PM.

At 88, Abraham Bursztein is seeing his place in the world rapidly disappear. His kids have sold his Buenos Aires residence, set him up to move to a retirement home, and disagree on how to handle his fading health. But Abraham survived the Holocaust, made a successful life in a foreign land, and isn’t about to quietly fade away. Instead, he plots a secret one-way trip to Poland, where he plans to find the Christian friend who saved him from certain death at the end of World War II, and to keep his promise to return one day.

Comedic and poignant in equal measure, from Argentina to Spain, across Germany and finally to Poland, Abraham is on his own but also accompanied by the characters he meets along the way, who both help him and need his help. A standout among these is the iconic Spanish actress Angela Molina, as the proprietor of the Madrid hotel where he stays.

With its klezmer-driven score, evocative cinematography and fleet pacing, The Last Suit approaches its weighty themes with a light touch that illuminates a serious story. And in its mix of Spanish, Yiddish, German and Polish it is a globe-trotting surprise, a late-in-life road movie with planes, trains and heart.

About the Moderator
Professor Daremblum will provide an overview of the history of Argentinian Jews, focusing on how history and culture inform this film and impact Abraham’s special journey. Q&A included.
Naomi Daremblum, PhD, is originally from Costa Rica and is a specialist on Latin American culture, art and politics. She has had teaching appointments at NYU and The New School, and is currently a professor at Montgomery College.