IN THE SANDS OF SINAI

IN THE SANDS OF SINAI 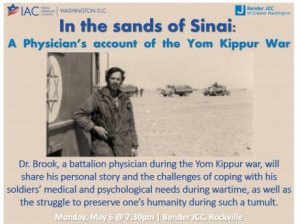 October 1973: A young physician in Israel prepares to celebrate the Jewish High Holidays with his wife and children, when a sudden military invasion changes his life forever. Itzhak Brook, a veteran of both the Israeli Defense Forces and the United States Navy, who served as a medic in the Six Day War in 1967 and as a battalion physician during the Yom Kippur war in 1973, recounts his experience of a physician facing the daily struggle of survival in the Sinai battle zone. Expected to heal his soldiers’ physical combat wounds, Dr. Brook must also address his soldiers’ psychological battlefield trauma. On Monday, May 6 2019, right before Yom Hazikaron, He will share his perspective of a war that shaped his own life, as well as his nation’s fragile identity.

Dr. Brook is not asking for an honorarium for his presentation. Instead, a donation to Friends of Disabled Israeli Veterans בית הלוחם would be appreciated. http://fidv.org/