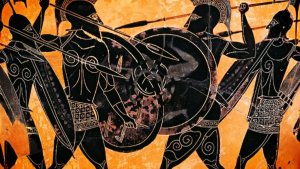 The Spartans were once the supreme infantry power in the Greek world. Their enemies usually did not dare to face them in the field and pretty much came into battle expecting to lose. The Athenians were the supreme naval power, so far superior that after the first few engagements of the Peloponnesian War, their enemies fled if they saw them on the seas.

These two powers fought each other and for years tried to figure out how best to deploy their military strengths and defend their weaknesses. This talk, after a brief introduction to Spartan society and history, analyzes how the Spartans found a winning strategy and were able to defeat the Athenians. Perhaps, more than any other factor, the key to victory was the ability of the Spartans to produce leaders who could find the weak spots in the Athenian system.

Alfred S. Bradford holds the John Saxon Chair in Ancient History at the University of Oklahoma