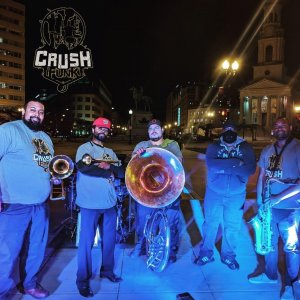 Outdoor Concert at the Bender JCC of Greater Washington

The Crush Funk Brass Band is a brilliant, innovative group of musicians hailing from Washington DC, comprised of alums from The University of The District of Columbia, Bowie State University, and Howard University.

Throughout the JxJ Festival, The Crush Funk Brass Band will be mixing Klezmer and other Jewish music into their repertoire and partnering with local Klezmer superstar Seth Kibel. Catch them around town doing free shows in DC parks, and then join us for their Festival finale (ticketed concert) at the Bender JCC of Greater Washington on the last day of the Festival.

Influenced by all genres of music, the band’s style is unique, embodying the brass tones of New Orleans, with an Urban Capital City modern pop-fun(k) twist. The mission of the band is simple: “To bring life to the city through music where least expected, to enrich the lives of others and to continue growing and striving for high musical excellence.” The band has appeared on Last Week Tonight with John Oliver, Good Morning America, NBC, ABC, CBS, The Washington Post and WPFW.

For the best experience, bring your own beach chairs and/or picnic blankets!