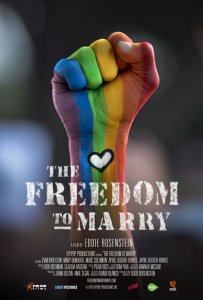 Due to low ticket sales, this screening has been cancelled.

THE FREEDOM TO MARRY follows the United States’ LGBTQ community’s fight for marriage equality in a  nail-biting, untold story of how same-sex marriage became law of the land. This documentary follows Evan Wolfson, the architect of the movement, civil rights attorney Mary Bonauto and their key colleagues on this decades-long battle, culminating in a dramatic fight at the United States Supreme Court.  “Suspenseful and thoroughly moving and inspiring.” – The Boston Globe