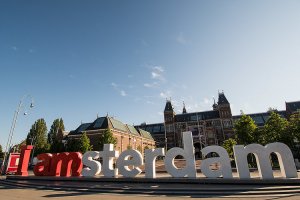 Passport J: Jewish Amsterdam *Live Virtual Tour*Wednesday, December 29 I 4:00 PM I $10Let’s explore Jewish Amsterdam live on Zoom, from the comfort of your home, led by Sabry, our tour guide extraordinaire. It is a compelling and fascinating story. He will leave you with a profound understanding of what it was and is to be Jewish in Amsterdam.Amsterdam has been the center of the Dutch Jewish community from the 16th century up until the Second World War. Once crowded with open-air stalls, smoking factories and tenement buildings, the Old Jewish Quarter still retains several moving reminders of the Jewish community that was torn apart during the war. Sabry explores several key sights in the area, including the stunning Portuguese Synagogue, a centerpiece of the Jewish district. He will also share his favorite street in Amsterdam. There is much to reveal about the century-long Jewish contribution to Amsterdam’s history.Questions? Contact Frieda Enochfenoch@benderjccgw.org or 301-348-3809