Each year, Camp JCC recognizes its outstanding staff through the R. Andrew Helgeson Heart of Gold Recognition Program. Andrew was an exemplary young man who passed away in 2005, just prior to his high school graduation, from sudden cardiac arrest. His kindness, warmth, joy for life, and love for the campers at Camp JCC were remarkable.

To honor Andrew’s memory, his family established the R. Andrew Helgeson Heart of Gold Recognition Program which recognizes those counselors who exhibit outstanding effort and mirror his character. 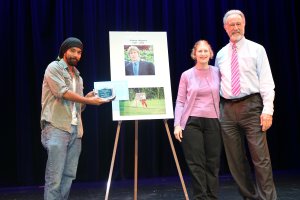 The Helgeson family has worked diligently to keep Andrew’s memory alive by creating the Richard Andrew Helgeson Memorial Foundation (see below) to educate the public about sudden cardiac arrest and by supporting the Center’s effort to encourage excellence in counselors.

If you would like to recognize your child’s counselors, please consider making a gift in their honor to the R. Andrew Helgeson Heart of Gold Memorial Endowment Fund. This fund supports and perpetuates the R. Andrew Helgeson Heart of Gold Recognition Program for outstanding Camp JCC counselors. Each honored staff member receives a personal notification of your tribute. Donated funds are used to publicly recognize those staffers selected as most outstanding. Gifts can be made online or by contacting Katya at 301.348.3855 or katya@jccgw.org.

Andrew passed away unexpectedly from Sudden Cardiac Arrest on May 25, 2005, at only 18 years old, just prior to his high school graduation. Andrew’s family established the Richard Andrew Helgeson Memorial Foundation to raise awareness of sudden cardiac arrest (SCA) in young people. SCA has been recognized since 1954 and continues to pose a threat to our young people; still, the medical profession knows little about the causes.

The Foundation was successful in promoting and lobbying passage of a bill dubbed “Andrew’s Law” that was signed by then-Governor Robert Ehrlich on April 25, 2006. Andrew’s Law mandates the placement of AEDs (automated external defibrillator) in all Maryland high schools and at all school-sponsored sporting events to protect children, staff and visitors.

In May of 2008, Governor Martin O’Malley signed a bill that he said was inspired by Andrew that was an amendment to the Good Samaritan Law which clarifies that individuals shall not be held liable for using Automated External Defibrillators (AEDs) to save victims. Governor O’Malley also declared May 25 as Sudden Cardiac Arrest Awareness Day in Maryland in honor of Andrew.

“The R. Andrew Helgeson Camp JCC Heart of Gold Counselor Awards are a source of great pride for us. It is a wonderful tribute that the counselors emulate Andrew’s exceptional qualities in a summer-long program. The fact that such a well-received and highly-sought award program is named in honor of Andrew is evidence to the fact that others saw in Andrew the special outstanding qualities that we, his family, always knew existed. Rita, Jennifer and I are privileged and honored to be able to present the awards and provide financial support through an endowment fund so that they always continue. We want to thank the parents who contribute to the fund, the counselors and staff of Camp JCC and the campers themselves who make it all worthwhile. Like Andrew said, ‘I can’t believe I get paid to have this much fun being a counselor.’ He loved Camp JCC.”